Our 'Ride For Rations 2013' (14 to 15 Sep 2013) may have ended on the high following our recent 'post-ride thank you' dinner get-together at Aranda Country Club.  While our adrenalin rush has yet to fade away anytime soon, ambitious plan is already underway for 2014.  This is our third consecutive year organised by Bike-Aid Singapore where 'Ride For Rations' remains symbolic and indeed, I am honoured to be part of the organising committee for this year.  This fund raising cycling project attracted some 140 participants with more than 100 cyclists and the rest providing vital support along the cycling route.  Thanks to many supporters, the event received overwhelming support from many private organisations.  Many cyclists who joined in the last two years signed up again and there were even more who joined for the first time when they heard about the event through word-of-mouth and social media platforms.  This year recorded the highest number of cyclists and supporters.

All cyclists were required to cycle from Malacca to Singapore with a night stopover in Batu Pahat covering a distance of some 250 km.  Cyclists and supporters needed to pay S$250 each to cover 2 nights accommodation (Malacca and Batu Pahat), one way coach transfer to Malacca, meals, isotonic drinks & mineral water and fruits.  Above that, each cyclist had to raise a minimum sum of S$500 from friends, relatives and colleagues.  All proceeds are meant for Sunlove Home.  Following our successes in 2011 & 2012, our organising committee was quiet confident that 2013 should do much better and therefore, gamely upped the ante to S$220,000 in raised funds for Sunlove Home.


Video Montage of Ride For Rations 2014, courtesy of my buddy, Kevin Soh

On 13 Sep, Friday we were ready to set off by coaches for Malacca.  There were two pick up venues, two coaches leaving from Pasir Ris near Aranda Country Club at 1000 hrs & one at 1200 hrs and one coach lws by me leaving at West Coast Plaza at 1000 hrs.  Support crew and some advance party drove up on own.  Our first night in Malacca was spent at Hatten Hotel.

Almost all my regular cycling kakis from GP Riders including my regular run kakis participated and we were joined by other social cycling groups such as Hougang Super Slow Riders and EZY Riders, among others.  Shoeb, our Bike-Aid President and organising committee Chairman who had been providing support in the last two years joined as cyclist this time around.  I believe he had the permission to ride from his equally spirited and supportive wife, Shireen.

Day one ride from Malacca to Batu Pahat covered a distance of a little over 100 km but everyone had to contend with the hot weather.  After a short speech by Shoeb at the entrance of Hatten Hotel, we were flagged off in batches at about 0800 hrs.  By 1600 hrs, the last group of cyclists made it to Pine Hotel in Batu Pahat where we were to spend a night.  Everyone made it safely and that was key.  Dinner was then arranged at the hotel and a surprise birthday celebration was thrown in for those who are born in the month of September.

On day two ride, it was raining quite heavily early in the morning in Batu Pahat followed by some flashes of lightning which somewhat marred our plan to set-off early.  Finally, we started more than half an hour late under the rain.  Some part of the roads were quickly flooded which made cycling quite a treacherous affair.  Second day of ride is always more challenging, given the longer distance of more than 140 km to be covered.  The rain was a blessing and it began to fizzle down as we cycled south.  The weather was fairly cool throughout.  No one suffered from heat exhaustion saved for day one.

As always, the most challenging part was the crossing from Pekan Nanas town to Singapore after our lunch.  We had to cycle alongside the heavy traffic which can filter from either side at some points especially in Skudai.  Therefore, we had to group the cyclists before despatching them off.  I led a group of 21 of cyclists and with my buddy, Chua providing the vehicle support in front, I felt assured.  Admittedly, I heaved a big sigh of relief when we finally touched home in Marsiling.

The two days ride ended with everyone safely accounted for, no major hiccups along the way and best of all, we received a total contribution of more than S$225,000 from the combined effort of everyone and contributions continue to pour in to these days.

Popular posts from this blog

Pretender, The Way To Go For Some

- October 21, 2012
I am not a perfect being, I have many flaws but when it comes to 'play act', I will fare badly.  As an imperfect being I am and who am I to comment on somebody's flaw, really?  But I can't help posting my thought on my blog as it has been bothering me for quite a while.  Tell you all already, I am not perfect lor.      I know this person for good many years but I will not name her (opp, she is a lady...well, what the heck) - for obvious reasons.  To get my story going, let me give her an initial instead.  Okay, I will call her AS (not ASS but AS, the initial).  Why I say AS is a great pretender?  This is the story...  By the way, we were friends once but not anymore for quite few years.  Admittedly, in my 50 years in life, I have not met anyone who will (without shame) announce to the world that he or she has worked his or her butt out when in actual fact, it is the contrary.  I won't say AS is a bad leader but an exemplary one, far from it?  If she does not th
Read more 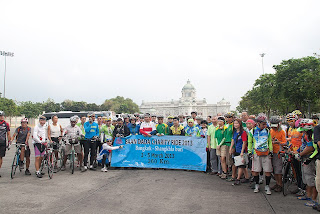 It is another Bike-Aid Singapore's initiative and this time, Nicky was our lead organiser and he was ably assisted by Ler and Jennifer, both of whom have had involved in many fund raising in Singapore, Thailand and the region over the years.  Jennifer and Ler have cemented close relationship with some Thais in the biking community and best of all, they can also converse in the ear- soothing  Thai language, certainly a plus for us.  And also, not forgetting, June, the ever young looking wife of Nicky who has been providing the admin support with flight reservation, the program proper, etc and during the 3 days cycling tour, following the cycling entourage in the support vehicle.  June has been a great help throughout, ensuring we were hydrated that kept us going and going.  And there is another lovely spouse of David and she is Ivy who has also been great in providing the vital support to the entourage.  Co-incidentally, this is also the 10th year for Bike-Aid Singapore to organise
Read more 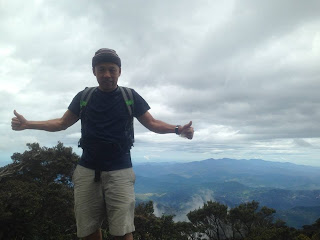 Somewhere near the rest house on the way up, it was more than 3,000 metres high It is my fourth consecutive climb to Mt Kinabalu climb and barring any unforeseeable, I should be doing my fifth climb next year.  I do not organise many trekking events but Mt Kinabalu is always close to my heart.  It has been an annual ritual of sorts to pay homage, something words can't describe.  Last year, I led a group of 20 and this year, I had 14 comprising a motley group of outdoor enthusiasts, eight men and six ladies from The Philippines, Myanmar, Belgium, India and Singapore.  The oldest member is close to 60, Jimmy who is a friend of mine and he is joining me for the first time.  I must admit the ladies were surprised when they learnt of his age.  Further, he does not look anywhere near 60 age range, one even guessed he is in his 30s.  He even proved that look age aside, he has the fitness and physical strength to reach the summit.  I am impressed, I must say.  Months prior to the tri
Read more

Collin Ng
Singapore
Time flies and I am 57 now. Admittedly, my overall physical fitness has certainly dipped as I have been doing fewer running to burn off calories. Yes, time to buck up now. Let's hope 2019 will bring more opportunities. Hooray!